TOP TEN IN THE COUNTRY

Musically, they’re built in the family of 1, 2 and 5 chords — full of muscle and full of happy.  They’re memorable, easy to sing, and usually have a purposefully unmemorable verse to set up for the spectacular big chorus.

Good ones are priceless to a university from a fundraising, recruitment and cultural perspective.

Here are our top ten…

Written in 1910 by Philip Enger, director of the West Point Band at the time, On, Brave Old Army Team is the official fight song of U.S. Military Academy at West Point.

In 1910 Enger collaborated on the words to a new cheer for the school. While returning to his quarters, Egner began whistling an improvised tune which he decided would go well with the words for the new cheer, making it more suited for a fightsong than a football cheer. 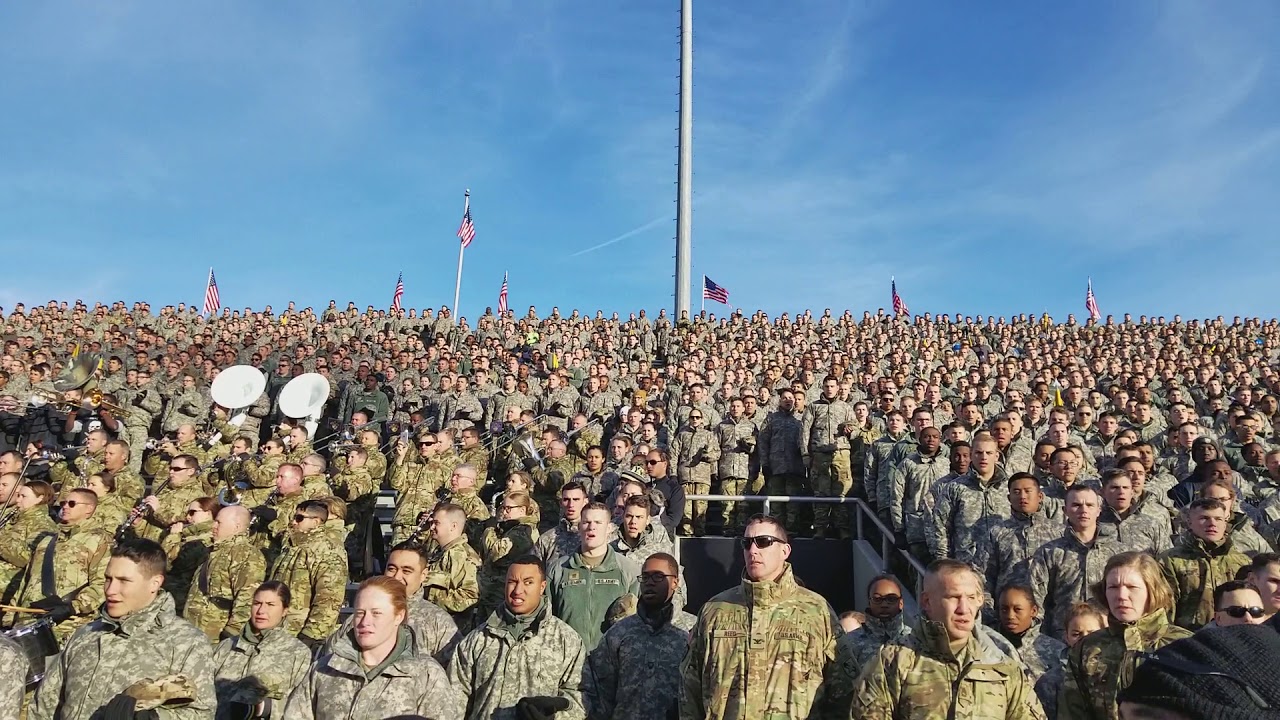 It was intended as an entry in a contest for a student-composed opera or skit. The skit was never finished, and the students sold the song to the U. of I. Supply Store in Champaign where it was copyrighted in 1911.

The song grew so popular that in 1928 Melrose Bros. Music Co., Inc. of Chicago published it as sheet music.

Oskee Wow-Wow is an invented phrase similar to other college cheers and yells of that period, and the Illinois cheer was used from before the turn of the Twentieth Century. This fight song distinguishes itself through its musicality and unique character.

Oskee Wow-Wow has a less aggressive feel than many other college fight songs, but it’s a song that brings Illini fans together to rally behind their team, singing it proudly on gameday.

The song’s original lyrics reflected the school’s role as an agricultural college, as well as its rivalry with the University of Michigan.

The lyrics have since been changed to reflect the change in the school’s mascot from “Aggies” to the “Spartans” as well as generalizing all lyrics referring to the University of Michigan to be able to apply to any opponent.

Victory for MSU boasts a big, sweeping trombone melody and a strong march-like rhythm set by the cymbals and drumline making it nearly impossible for a Michigan State fan to not clap along with a smile on their face anytime they hear this tune. 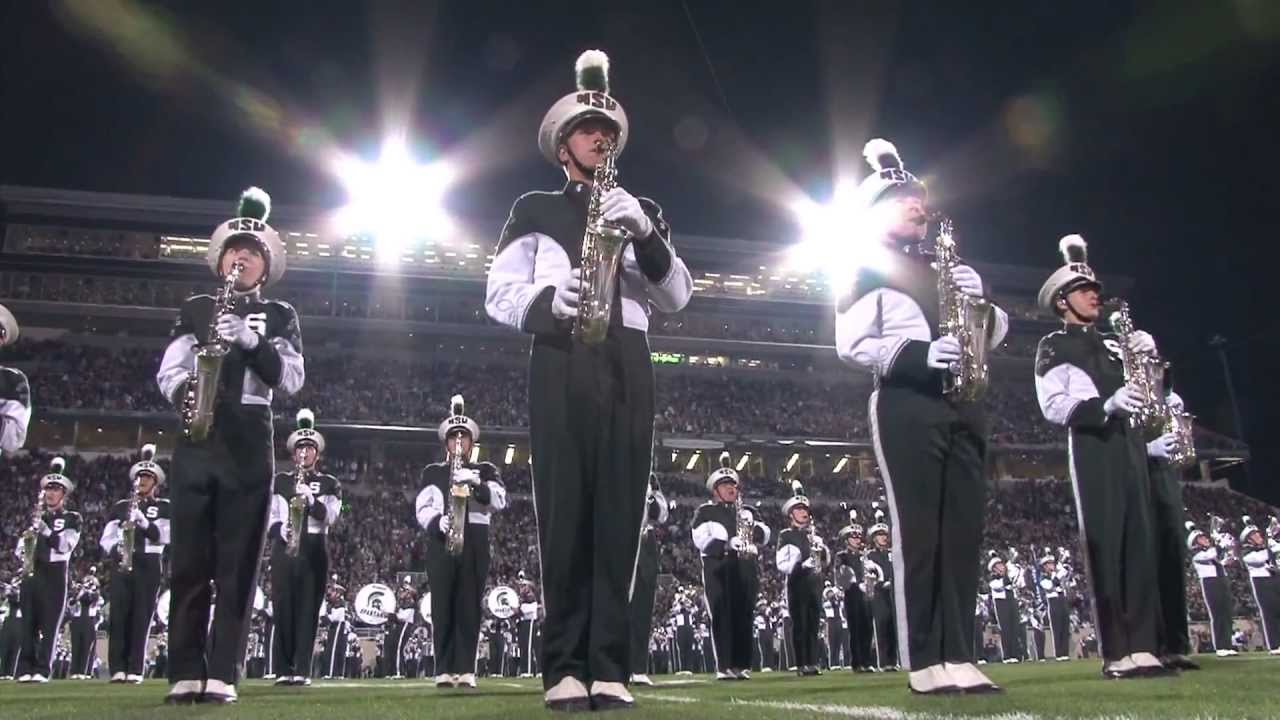 Characterized by its rolling melody and tuba soli sing-along section, Arkansas Fight encourages crowd involvement during the soli by giving them a chance to participate and sing the melody in the playing of their school fight song.

‘Hail Purdue!’ is the official fight song of Purdue University. The lyrics were written in 1912 by James R. Morrison (class of 1915) and set to music by Edward S. Wotawa (class of 1912), this fight song was originally titled Purdue War Song and written for the Purdue Varsity Glee Club.

Up until the adoption of Purdue Hymn in 1993, ‘Hail Purdue!’ served as both the university’s fight song and alma mater.

Currently, ‘Hail Purdue!’ is featured at every home football and can be heard all around campus for special occasions and school comradery.

With its march-like feel, unique, syncopated rhythms, tuba soli singing section, and a big tag ending, ‘Hail Purdue!’ sets itself apart from every other fight song in the country by combining musicality with tradition and engaging the crowd to participate each and every time the song is played. 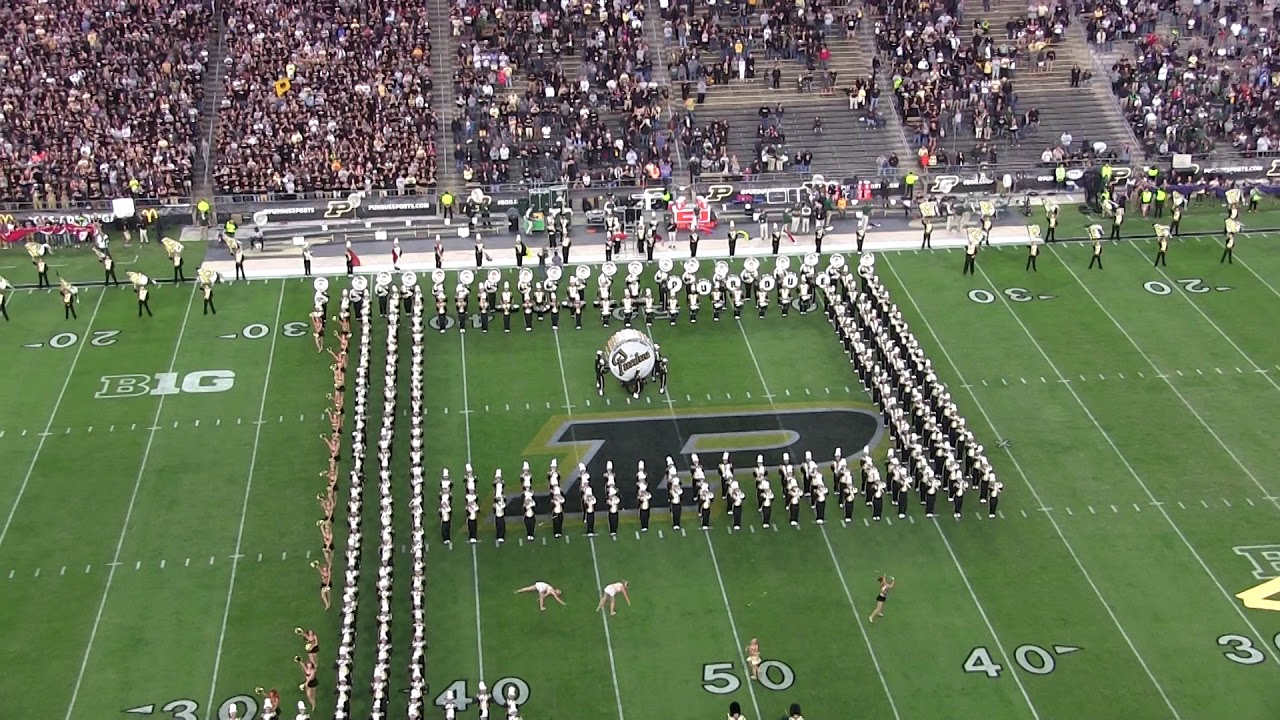 Fight On is the official fight song of the University of Southern California.

Written in 1922 by USC dental student, Milo Sweet, the song was originally created to be entered in a school spirit contest.

Fight On is now played at all USC sporting events as well as many other university-related events by the University of Southern California marching band, also known as The Spirit of Troy. Arguably one of the most theatrical college fight songs ever written, Fight On makes you feel as though you are in ancient Greece heading into battle.

With USC’s mascot being the Trojans, this song is incredibly fitting. Fight On is characterized by its belting brass fanfare that gets USC fans out of their seats and ready to back their Trojans as they head to war on the football field. 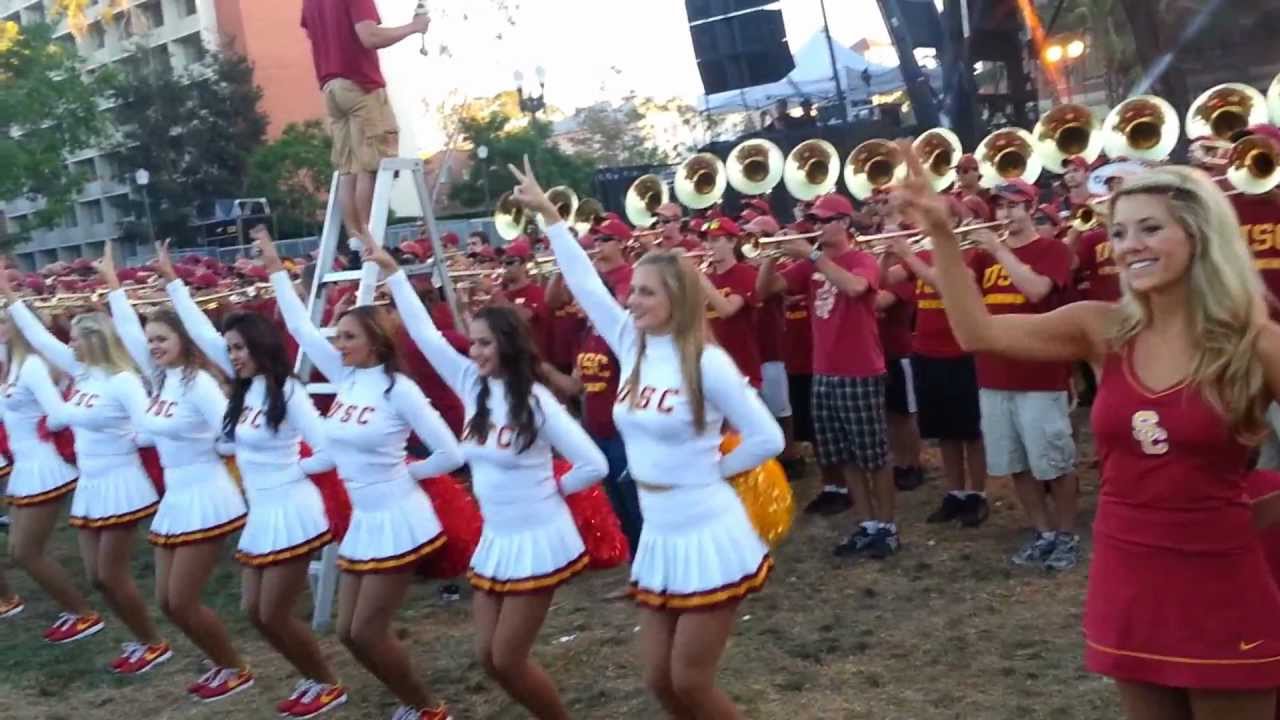 While the lyrics were written in 1905 by Aurther M. Alden, a student at OU, the tune of Boomer Sooner was actually taken from the fight song of Yale University, “Boola Boola”.

Only a year later an additional section was added from the University of North Carolina’s fight song“I’m a Tar Heel Born”. The phrase Boomer Sooner refers to the Land Run of 1889, in which the land around the modern university was settled. The OU marching band plays the fight song when the team takes the field and when the team scores a touchdown, a field goal, makes a big play or makes a play in general.

They also play it along with other fight songs while the Oklahoma defense is on the field to encourage the crowd to get loud. Some fans have informally counted it being played between 70 and 90 times a game making the melody among the most recognizable in college football. 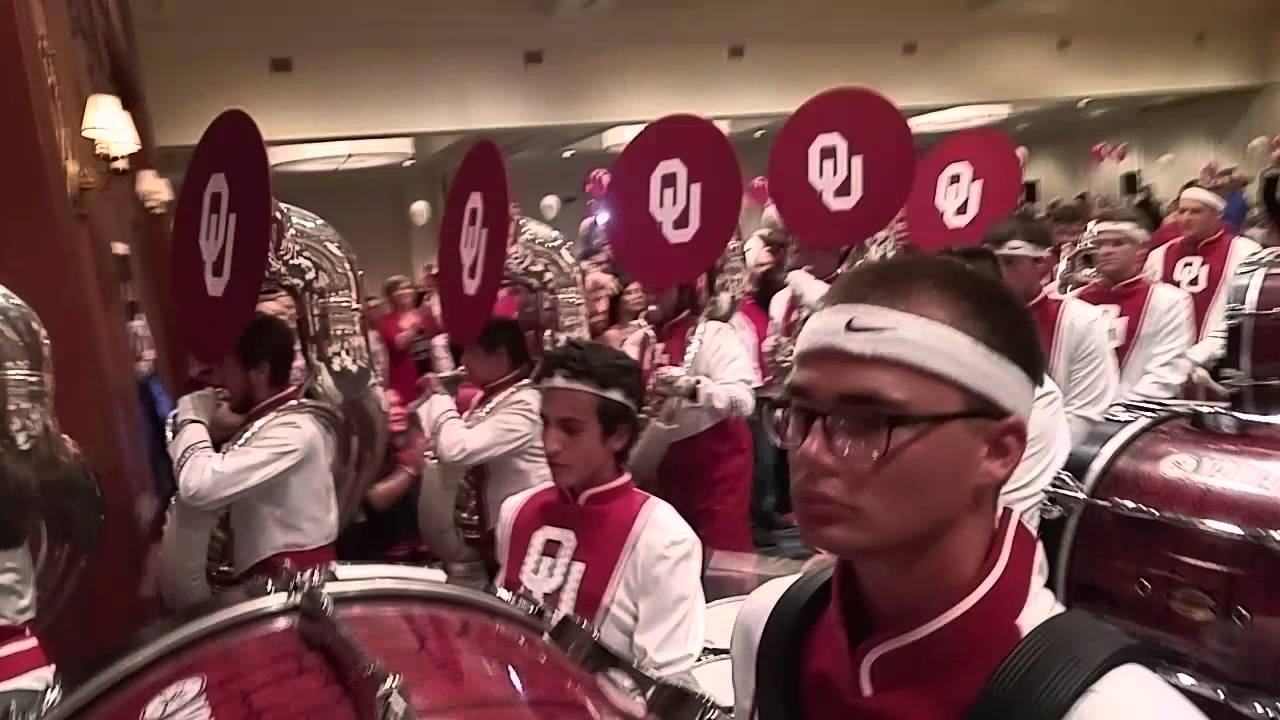 Michigan holds claim to perhaps the most iconic fight song in college football.

Titled The Victors this song is suited to the winningest college football program of all time. The song was written by Michigan student, Louis Elbel, who was Inspired by the Wolverines’ narrow 12-11 victory over the University of Chicago in 1898 that closed out their undefeated season and earned them their first Big Ten title.

The Victors is the quintessential Big Ten fight song with its simple and powerful melody led by the brass and complemented by ornate woodwind runs.

Whether you love or hate the University of Michigan football, you will surely find yourself bobbing your head to the upbeat fight song. 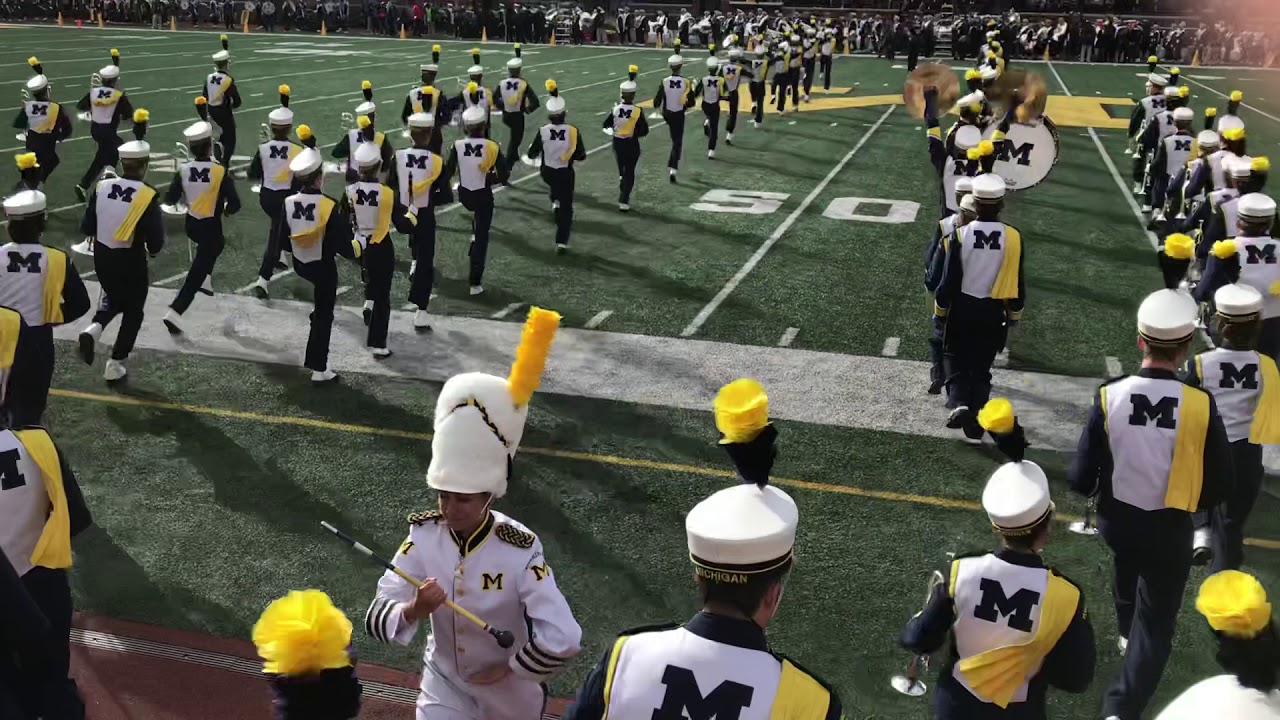 Texas Fight is the official fight song of the University of Texas at Austin and was written by Colonel Walter S. Hunnicutt.

Texas Fight was written in response to the song used by its rivals, Texas A&M University.

In 1952 by Colonel Hunnicutt stated, “I wrote ‘Texas Fight‘… in an attempt to counteract the songs and yells of the Texas Aggies, which were not complimentary to our student body and ridiculed The Eyes of Texas (the university’s alma mater).” 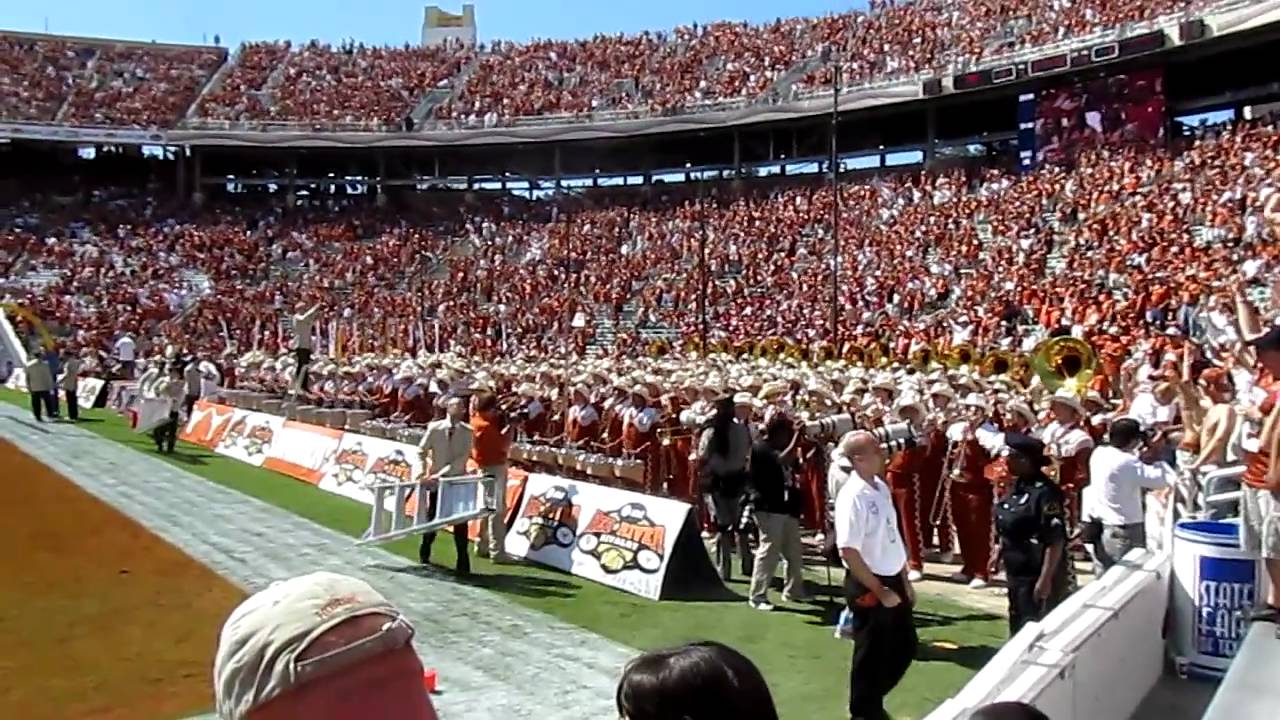 The song was first performed on Notre Dame’s campus on Easter Sunday 1909 and has been playing ever since. According to Professor  William Studwell of Northern Illinois University, Notre Dame Victory March is the first ranked college fight song.

Studwell stated it was “more borrowed, more famous and, frankly, you just hear it more.”

Notre Dame Victory March is without a doubt one of the most recognizable college fight songs of all time and is known and sung by every Notre Dame fan on game day. 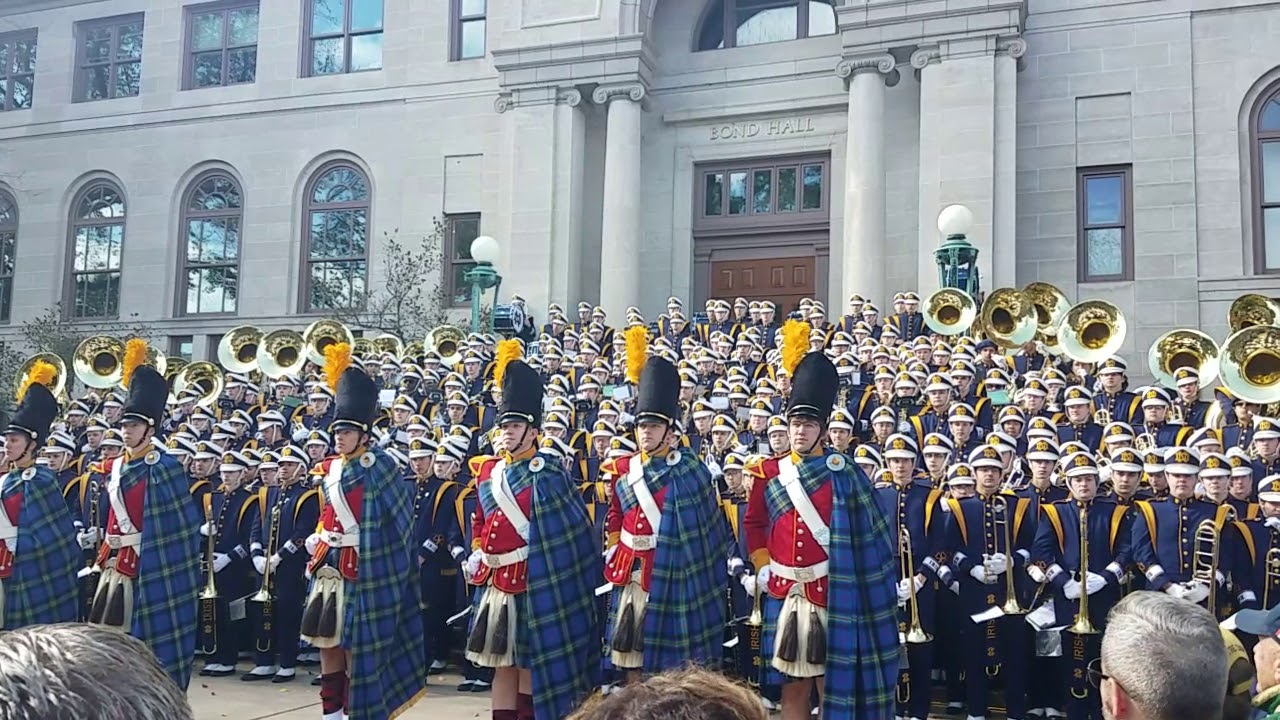